The Boston Bikes’ Roll It Forward program has kicked off another season of important and fun work. On Tuesday, Roll It Forward gave away 59 refurbished bikes to children ages 5-7 who needed one. The donation was part of “Bike Day” at the West Broadway housing development in South Boston and is one of many Boston Bikes will organize this year.

Children at the housing development were asked in advance if they wanted to receive a bike. On Tuesday, they waited in line, got to choose a new bike helmet, and then were presented with a bicycle refurbished just for them. They also got to meet Boston Mayor Martin Walsh, who helped hand out bikes and played basketball with the kids.

From there, the children got to practice on an obstacle course with help from volunteers, as their parents, grandparents and friends cheered them along. There was plenty of activity for other cyclists too. Boston Bikes was selling $5 subsidized memberships for the Hubway bike share program and provided free safety inspections for 31 cyclists. Another 10 residents used the event to give back, by donating their own bikes to help Roll It Forward. 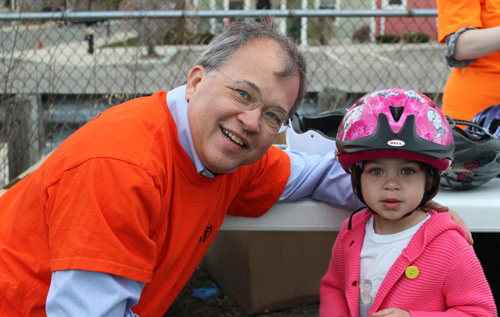 Photo: Attorney David White shown volunteering for the Boston Bikes’ Roll It Forward event on April 22, 2014. He helped children select bike helmets and made sure they properly fit.

Breakstone, White & Gluck is in its second year of supporting Boston Bikes’ Roll It Forward. This year, we are donating bike helmets for children, along with bike locks and bike lights. Cyclists are required to use bike lights if they cycle at night (defined under the law as thirty minutes after sunset until thirty minutes before sunrise).

“We are so happy to support Boston Bikes,” attorney David White said. “The program does an amazing job gathering, fixing, and giving away the bicycles. The kids know this is a special event and they really pay attention, including to when we explain the importance of always wearing a bike helmet to help prevent head injury.” 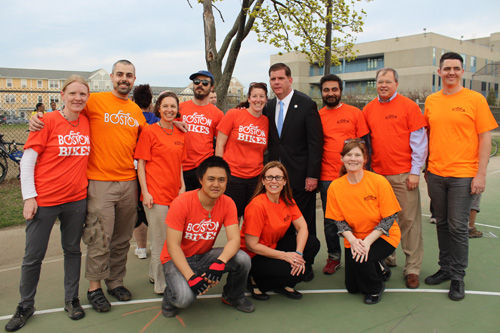 About Breakstone, White & Gluck
Breakstone, White & Gluck, a Boston personal injury law firm, is pleased to partner with Boston Bikes. Our attorneys encourage all cyclists to wear bike helmets to reduce the risk of serious head injuries while riding. According to the Centers for Disease Control and Prevention, bicyclists face a higher risk of crash-related injuries than drivers and occupants of motor vehicles. Children ages 5-14 and young adults ages 15-24 account for 60 percent of all bike-related injuries seen in U.S. hospital emergency rooms.

In 2013, we were proud to donate over 1,000 bike helmets to children in the Boston area. We are donating even more helmets this year. To learn more about our bicycle safety outreach, visit www.bwglaw.com/bikes. We also invite you to follow our Facebook page.