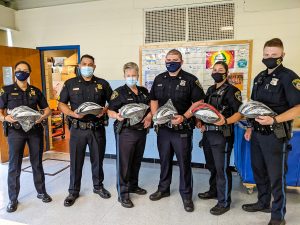 Breakstone, White & Gluck recently had the opportunity to contribute to a very worthwhile bike safety donation with the Framingham Public Schools. With COVID-19 driving a space shortage on school buses, the school system decided to buy 100 bicycles to help middle school students who needed the most help getting to school.

If you ride a bike, you know you must wear a helmet to protect yourself against head injuries. Well, Breakstone, White & Gluck had helmets and we were pleased to donate 100 bicycle helmets to students as part of our Project KidSafe campaign.

This donation began with a school counselor who noticed a student did not have a bus seat and this was causing issues with their attendance. An assistant superintendent asked if other students were facing the same problem. The answer was yes.

END_OF_DOCUMENT_TOKEN_TO_BE_REPLACED

Massachusetts Lawyers Weekly recently gave Breakstone, White & Gluck and our Project KidSafe campaign a nice mention. In 2019, our campaign donated over 4,000 bicycle helmets to children throughout the Boston area with help from more than 30 community partners and police departments. We look forward to continuing our work to protect children in 2020.

Helmet head (but in a good way) 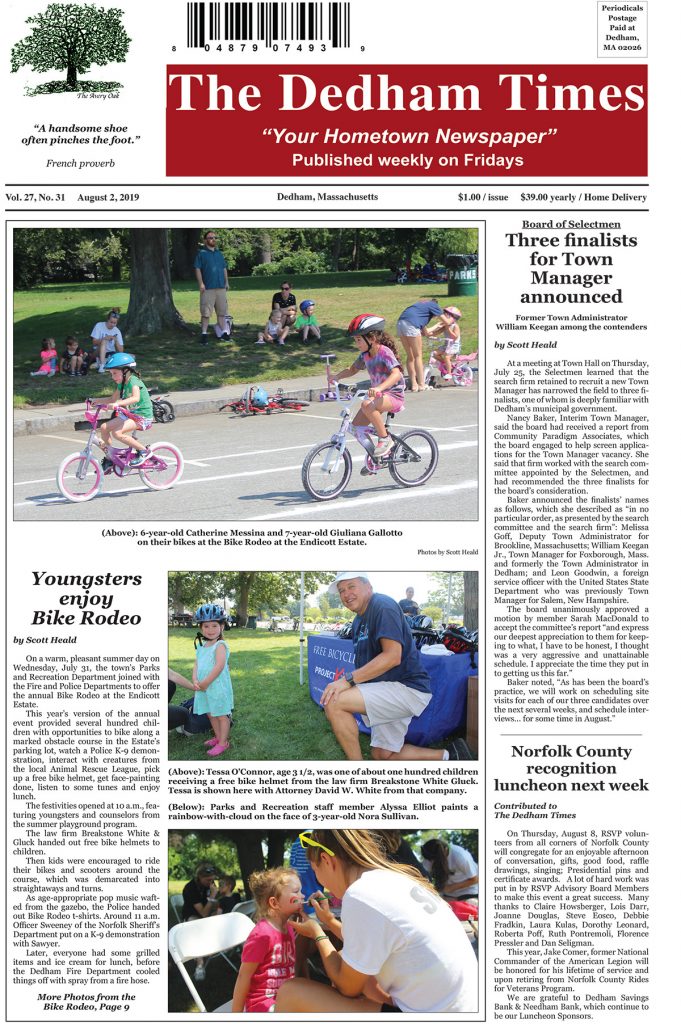 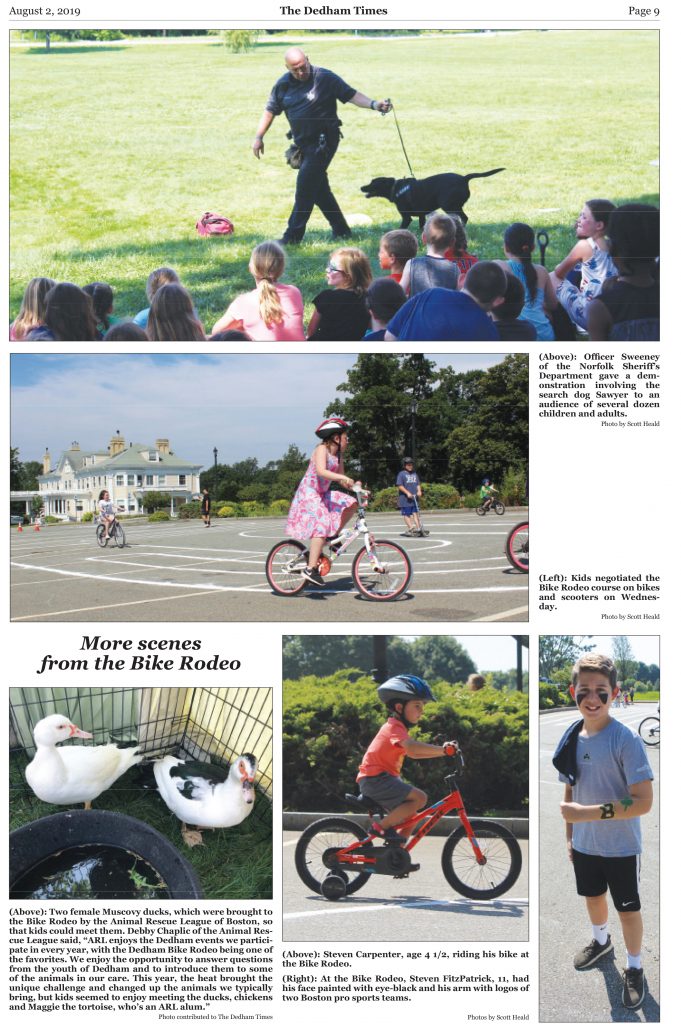 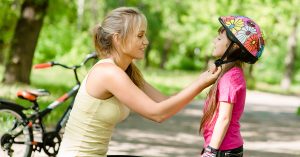 Boston saw 70 degrees in February last week. Naturally, many of us are now ready for Spring. If you are a cyclist or have a child who rides, now is the time to get ready for a safe cycling season.

The attorneys of Breakstone, White & Gluck have long represented cyclists who have been injured by negligent drivers in Massachusetts. We are committed to preventing these bicycle accidents and reducing injuries. In a few weeks, we will begin the 6th year of our Project KidSafe campaign, donating bicycle helmets to children in Boston and other communities. Bike helmets are critical to preventing concussions and traumatic brain injuries. And they are most effective when cyclists start wearing them at an early age with positive reinforcement from parents and other family members.

We will share more on our campaign soon. For now, we have a few bike safety tips from our attorneys and the League of American Bicyclists to help you get ready for a safe cycling season.

END_OF_DOCUMENT_TOKEN_TO_BE_REPLACED 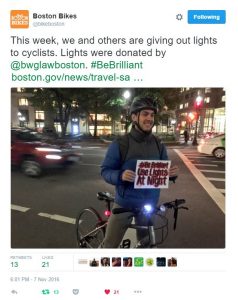 END_OF_DOCUMENT_TOKEN_TO_BE_REPLACED

Breakstone, White & Gluck, a longtime supporter of Bikes Not Bombs, was pleased to partner up with the organization again this year, by donating bicycle helmets to the Girls In Action Program. Attorney David White recently attended the graduation ceremony.

Bikes Not Bombs is based in Jamaica Plain and has two popular youth programs: Earn-A-Bike and Girls In Action. Both are terrific programs, which give children and teenagers a chance to learn bike repair, bike safety skills and make friends. At the beginning of class, the youth get to help select parts for a bike they will help build, eventually “earn” and get to take home. 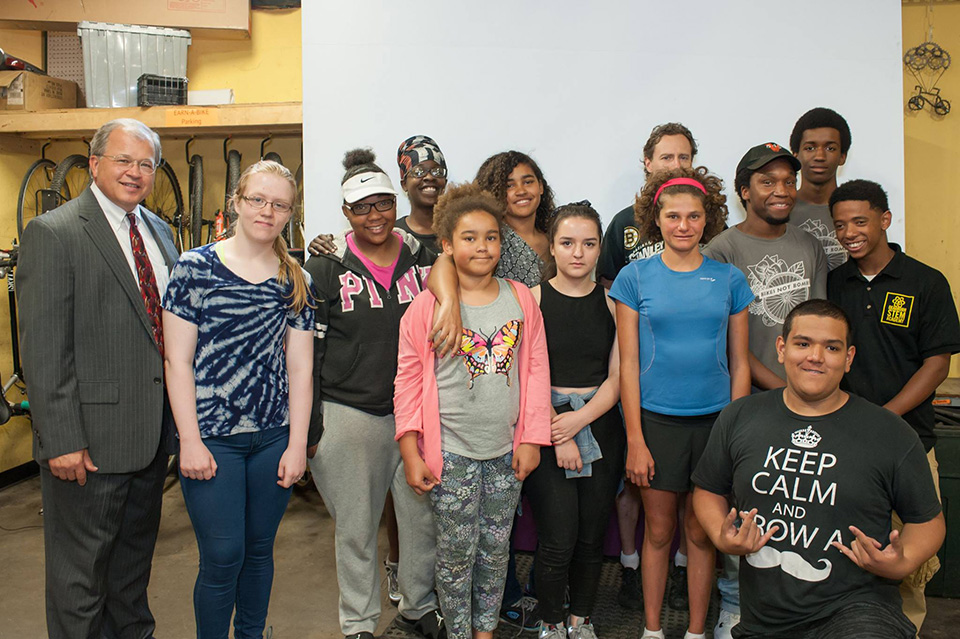 During the class, students are taught the rules of the road and to always wear a bicycle helmet. They get plenty of practice, taking group rides in the city. They are shown how to travel on bike lanes and navigate park and other areas. Earn-A-Bike is a co-ed program while Girls In Action is open to girls ages 12-18 and includes some field trips and activities outside the bike shop.

Bikes Not Bombs Safety Video
One of the Girls In Action programs created a safety video a few years ago. The first topic was bicycle helmet safety and the importance of wearing one every time you ride. Watch.

About Bikes Not Bombs

Bikes Not Bombs works locally and internationally, founded in 1984 as a response to the United States military backing of the Contra attacks on Nicaragua. The organization believes in using the bicycle as a vehicle for social change and each year, collects roughly 6,000 used bicycles and tons of parts from supporters in Boston and New England.

Some of the bicycles are used in its youth programming. But many bikes are sent to partner groups in other countries where a bicycle can increase access to economic opportunity, education, health care, and civic engagement. Bikes Not Bombs was founded in 1984 and has since shipped over 55,000 bicycles to partner groups in 14 countries in the Global South.

END_OF_DOCUMENT_TOKEN_TO_BE_REPLACED

Cyclists of all ages came out strong for Lexington’s Bike Walk ‘n Bus Week in May. Breakstone, White & Gluck was pleased to donate bicycle helmets to children who needed one at events such as the Bike Smart Class for fourth- and fifth-graders and the Bike Art Contest. With each helmet given, children and parents were shown how to properly fit them on their own.

We are also happy to see these two little cyclists stopped by for a Project KidSafe helmet. Thanks ArtsOffRoad Lexington for sending along the photos. 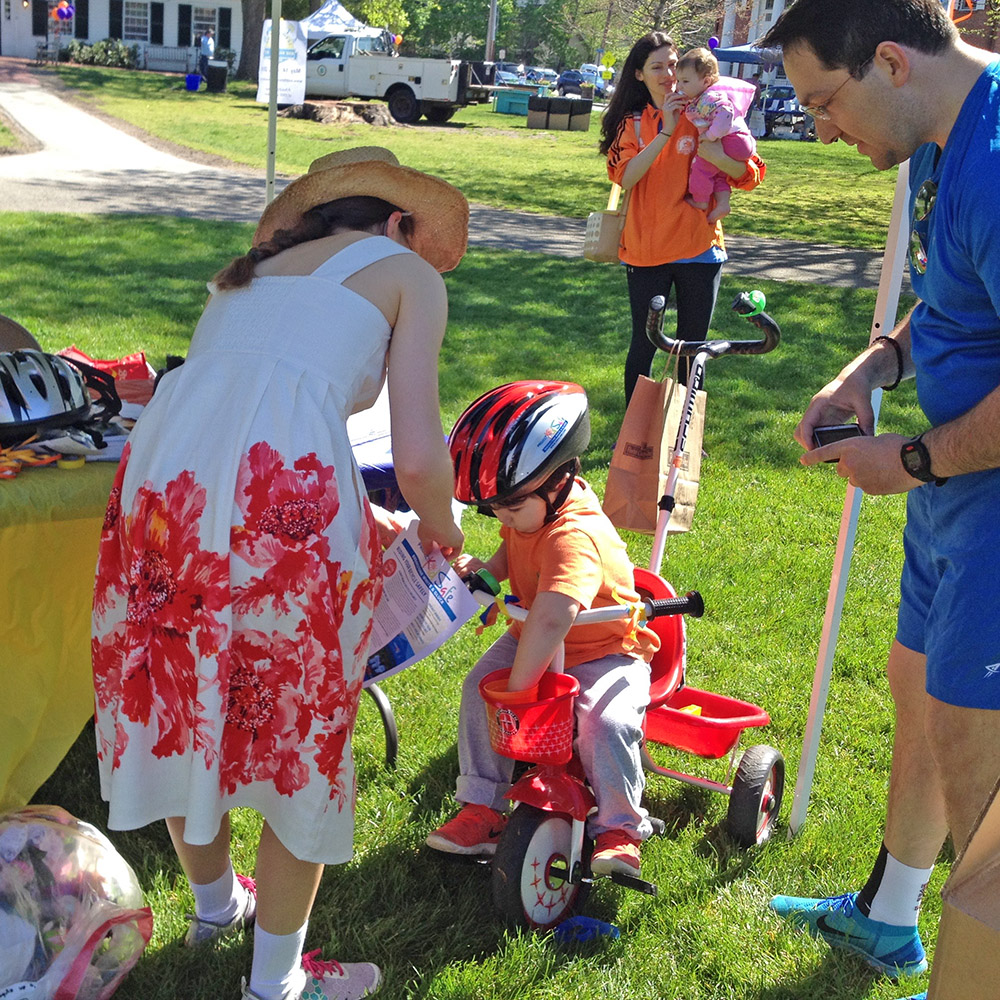 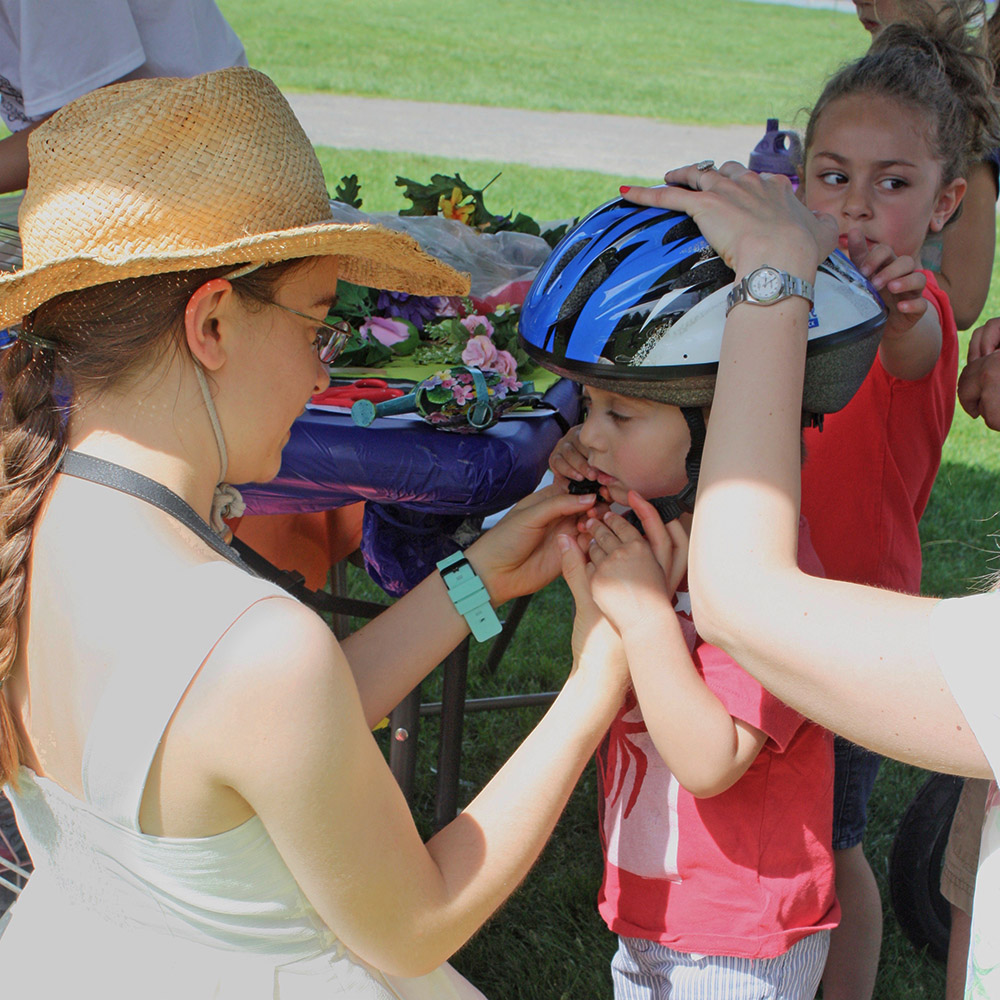 Bike Walk ‘n Bus Week was held from May 14-22 and coincided with Bay State Bike Week. While the rest of the state celebrated cycling, Lexington focused on bicycling, walking and encouraging use of alternate transportation, such as buses.

There are two active committees representing cyclists in Lexington: the Lexington Bicycle Advisory Committee and the Friends of Lexington Bikeways, which coordinated the bicycle helmet donation from Breakstone, White & Gluck. Because of their work and the strong local interest in cycling, Lexington was named a bronze level Bicycle Friendly Community by the League of American Cyclists in 2015.

Breakstone, White & Gluck donated 140 bicycle helmets in Lexington this Spring. It is the third year we have made a donation and it is nice to see the community’s interest. In addition to Bike Walk ‘n Bus Walk Week, Lexington Police gave out bike helmets at Discovery Day on May 28th and showed children and families how to properly fit them.

Breakstone, White & Gluck donated the bicycle helmets as part of our Project KidSafe campaign. Since 2013, we have donated more than 10,000 bicycle helmets to help children prevent head injuries and ride their bicycles safely.

Read about our past events and donations here.

END_OF_DOCUMENT_TOKEN_TO_BE_REPLACED

Breakstone, White & Gluck was pleased to donate 140 bicycle helmets to children in Easthampton yesterday, with help from many hands in the community who care about bicycle safety. 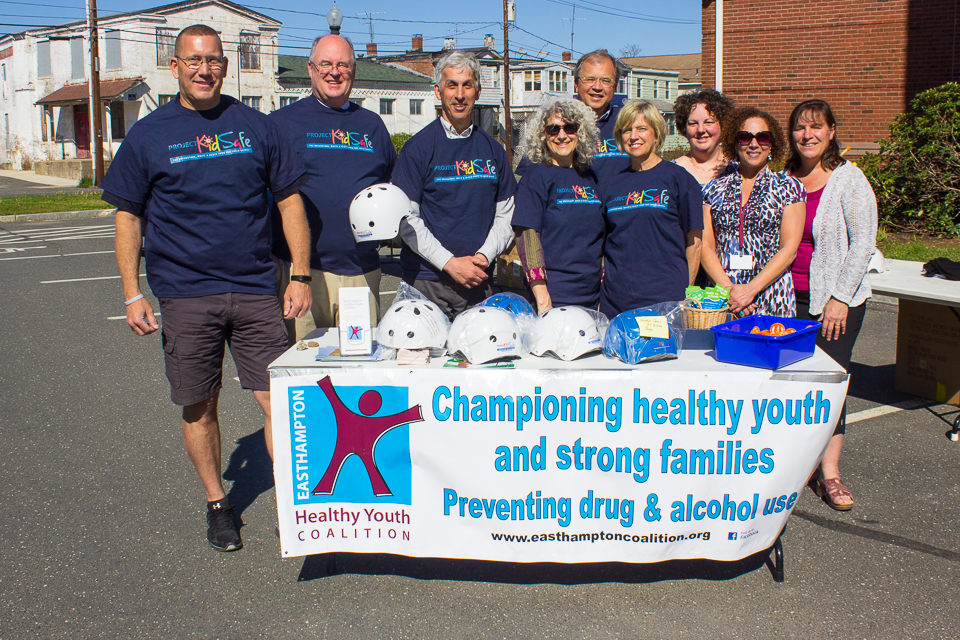 END_OF_DOCUMENT_TOKEN_TO_BE_REPLACED

With a donation from Breakstone, White & Gluck, the Cambridge Police Department will distribute bicycle helmets to children who need one during National Bike Safety Month. 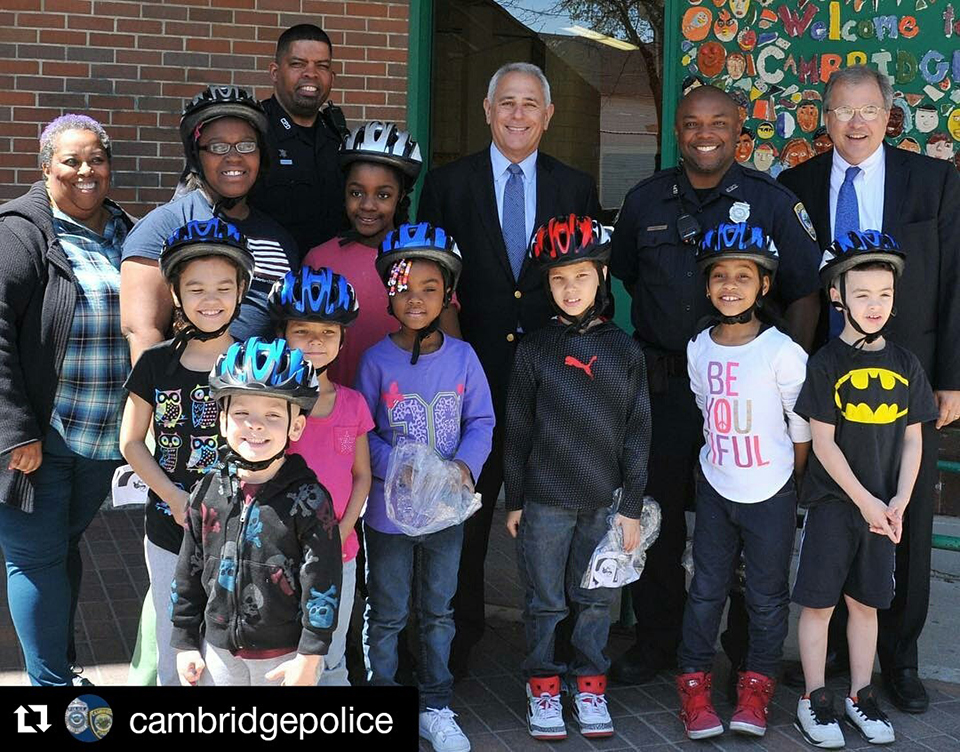 Cambridge Police has announced its first “helmet voucher” program as part of its National Bike Safety Month initiatives in May. Police officers will specifically be looking for children who are riding bicycles without a helmet throughout May and hand them a “helmet voucher,” which can be redeemed for a free bicycle helmet at the Cambridge Police Department.