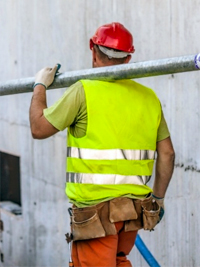 Construction workers face a high risk of physical injury on the job. In 2011, these workers accounted for 12 percent of all workplace deaths in the U.S., according to the Bureau of Labor Statistics (BLS). Construction accidents and injuries can happen when employers or construction site managers are negligent in complying with OSHA and other safety regulations, fail to properly staff a job or do not provide the necessary training.

The new study from Harvard School of Public Health shows 20 percent of the construction workers surveyed showed signs of being at risk for suicide. More than 40 percent had suffered one or more workplace injuries in the prior month.

The study was published online Oct. 1 in the Journal of Occupational and Environmental Medicine. Researchers say the findings show more detailed studies are needed to provide a better understanding of the high frequency of construction injuries and how they relate to mental distress. Researchers also want to focus on increasing literacy rates among construction workers and preventing suicide and suicide attempts.

Study Findings
In August 2012, the researchers surveyed 172 New England construction workers whose average age was 41 years old. They were questioned about psychological distress, depression, anxiety, job satisfaction, musculoskeletal use, injuries and alcohol and tobacco use.

Of these workers, 75 percent had experienced musculoskeletal pain over the past three months. In the month prior, 42 percent had reported one or more work injuries. When researchers followed up by phone with workers who fit the criteria for depression, 20 percent showed signs of being at risk for suicide. Some 16 percent reported they were distressed but the majority – nearly 60 percent – had sought no professional help.

When proper precautions are not taken, construction workers face numerous risks for physical injury and death. The most common causes are falls, electrocution, being struck by an object and being caught in or between equipment and buildings, according to the BLS. Nearly three out of every five construction workers are killed by one of these causes.

Over the summer, the state saw three tragedies. In August, a tree worker died from burn injuries in Holliston, after coming into contact with live wires. A week earlier, another tree worker suffered serious electrical burns in Chelmsford when he was hit by branches and live wires. In July, a 26-year-old construction worker was killed at a Plymouth construction site when a concrete form collapsed and crushed him beneath wooden frames.

MassCOSH is starting to collect new data on other risks to construction and other workers. In its most recent “Dying for Work” publication, it reported 320 Massachusetts workers died from occupational diseases. It estimated asbestos exposure caused over 90 deaths that year.