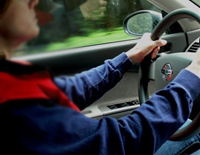 Talking, e-mailing and texting in the car are not any safer with voice recognition software, a new study finds.

Infotainment systems – those digital screens in a vehicle’s dashboard – are becoming more standard in cars. They have voice recognition software which allows drivers to talk on the phone hands-free or send e-mails and text messages by voice. You can ask your GPS for directions, go online and even log into social media sites, such as Facebook and Twitter, all while driving, though these practices are unsafe.

Distracted Driving Study
The new study by the AAA Foundation for Traffic Safety shows that putting the phone down and talking is still a risk. The study reported that speech-to-text technology causes a higher level of cognitive distraction than other activities behind the wheel, such as listening to a book on tape, the radio or talking on a hand-held phone or hands-free phone. Researchers compared drivers undertaking the different activities with eye-scanning technology that measured where driver attention was focused and electrical activity in the brain.

Distracted Driving Concerns
In 2013, 9 million systems will be shipped in cars worldwide, according to ABI Research, an industry research firm. The number is expected to rise as automakers push the technology.

This technology meets heavy government concern about distracted driving. In 2010, 3,092 people were killed in car crashes related to distracted driving, according to the National Highway Traffic Safety Administration.

Recently, National Transportation Safety Board Chairman Deborah Hersman called for a ban on all phone conversations behind the wheel, even with hands-free devices. Last December, the federal government released voluntary guidelines for the auto industry, recommending that many infotainment system features be disabled while cars are in use. The recommendations seek to prevent drivers from manually enter messages, read messages, browse the Internet and make video conference calls while driving.