Breakstone, White & Gluck was proud to partner with more than a dozen police departments in the Boston area during our 2016 Project KidSafe campaign. During the first three years of our campaign, police departments provided critical support in helping us give away children’s bicycle helmets. This year, we expanded our police donations to help protect more children and reach more families. Our partners, Marc L. Breakstone, David W. White and Ronald E. Gluck, thank police departments for helping us give away more than 1,500 helmets in 2016. Our attorneys have now donated over 10,000 helmets to children since 2013 and we owe much to the support of local police officers and departments.

The police departments did a great job this year. Some departments organized bike rodeos and gave away bike helmets. Others gave helmets away one at a time to children who needed one. Others, like Framingham, Lexington and Somerville, dispatched officers to help fit helmets at community events. For several years now, Somerville Police Officer Marianne Manfra has participated in two events in June. With her help, we reached more than 400 children in less than two weeks last Spring. Read about our Somerville bike helmet donations.

Cambridge Police Department incorporated the donation into their National Bike Safety Month activities, by announcing a helmet voucher program. Please check out our photo album and read more about our 2016 Project KidSafe campaign. 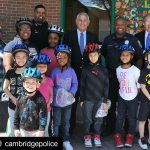 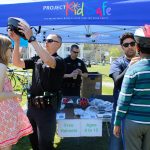 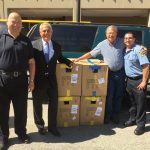 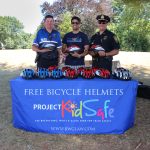 Attorney Reza Breakstone with Neil Cronin and Bob Nedder of the Dedham Police Department at the 2016 Dedham Bike Rodeo. 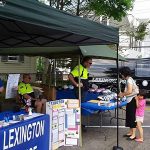 We thank Lexington Police for stepping in at the last minute and fitting helmets for the kids at Discovery Day in May! 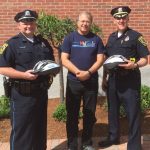 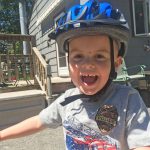 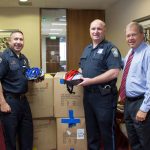 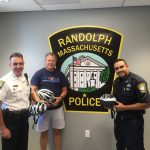 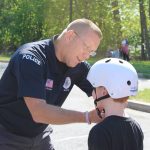 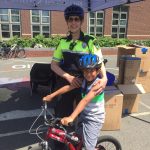 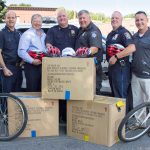 A little farther west, we thank Easthampton Police for supporting us.