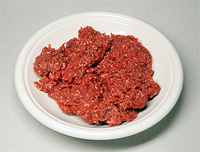 A Minnesota company has recalled nearly 30,000 pounds of fresh ground beef products amid a seven-state Salmonella outbreak which has infected 33 consumers, including in Massachusetts.

Cargill Meat Solutions recalled the 29,339 pounds of ground beef packaged at its Wyalusing, Pa. operation Sunday, saying the food products may be contaminated with Salmonella Enteritidis. Hannaford Supermarkets is alerting consumers that ground beef purchased from its stores may be contaminated. The Maine-based grocer has stores in Massachusetts, including in Marlborough, Quincy, Lowell and Saugus.

The contamination was uncovered during an investigation into the Salmonella outbreak, said the U.S. Department of Agriculture’s Food Safety and Inspection Service (FSIS). The 33 people with food poisoning came from Massachusetts, Maine, New Hampshire, New York, Rhode Island, Virginia and Vermont. Cargill packaged the meat for sale throughout the Northeast, but so far, Hannaford is the only store to alert its customers.

Hannaford is asking customers to look out for 85-percent ground beef produced by Cargill’s. They have “use or sell-by” dates between May 29 and June 16. The Salmonella Enteritidis outbreak strain is drug sensitive, meaning it can be treated with antibiotics.

Preventing Salmonella Food Poisoning
Salmonella is one of the most common types of food poisoning and it has many different strains. There are an estimated 1.2 million cases annually in the U.S., according to the Centers for Disease Control and Prevention. There are approximately 400 fatal Salmonella poisonings each year.

Salmonella causes diarrhea, abdominal cramping and fever among other symptoms, which typically emerge in between 12 and 72 hours. The elderly, sick and people with weakened immune systems are usually most vulnerable
Salmonella is transmitted when food or beverages have been contaminated with feces from animals or humans. It can result when food is handled by someone who has not washed their hands or during processing of animal products, such as beef, poultry, milk or eggs. After food is contaminated, Salmonella will expand if not refrigerated. Fully cooking meat will kill any Salmonella contamination.

You can prevent Salmonella food poisoning by refrigerating or freezing chicken, beef, poultry and eggs within two hours of purchasing. When handling food, wash your hands with warm, soapy water for at least 20 seconds. Use separate cutting boards for raw meat, fish and poultry and keep them separate from each other. Use a food thermometer to cook raw meat and poultry to safe temperatures for consuming, which is 160 degrees fahrenheit for beef and pork and 165 degrees for poultry.