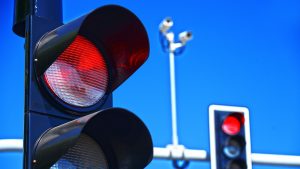 In Massachusetts, drivers are getting a strong warning to slow down this week as the state Senate debates red light cameras.

The state Senate is scheduled to debate legislation proposed by Sen. William Brownsberger and redrafted by the Ways and Means Committee.

The proposed bill would grant Massachusetts cities and towns new authority to install automated camera systems to capture vehicles that violate traffic laws at intersections, according to The Boston Globe. The goal is safer roads; the AAA Foundation for Traffic Safety has reported red light cameras have contributed to a 14 percent reduction in traffic deaths at intersections.

Drivers who violate traffic laws could end up receiving a citation and fine, without ever being stopped by a police officer. The fine would be $25 and tied to the vehicle registration. The person listed on the vehicle registration will receive the traffic citation, not necessarily the person driving at the time. Violations would not count toward Massachusetts auto insurance surcharges.

This is an important proposal and drivers, cyclists and pedestrians want to watch this week. Many, many traffic crashes happen in intersections, when drivers speed through lights, veer out of their lanes or neglect to give cyclists and pedestrians enough space. At the same time, there are many concerns about privacy and how broad laws should reach.

Beyond Massachusetts, 20 states have passed laws allowing red light cameras, according to the Governors Highway Safety Association. These states stand divided on authority; 11 states fully permit use while 9 states only allow use in specific situations.

Under the Massachusetts proposal, communities could install one traffic camera for every 2,500 residents. Signs must be posted and visible warning drivers approaching the intersection.

To address privacy concerns, communities would be directed to capture photos without identifying the driver or passengers in the vehicle, or any of their belongings. Photographs would be destroyed within 48 hours.

Drivers can be cited for failure to stop for a red light, making an illegal turn at a red light or speeding. Drivers may be cited for traveling at least 5 miles per hour over the speed limit. There will be an appeals process for drivers.

The law should not impact green light or yellow light laws. Lawmakers wrote in language that says a vehicle can be across the line during a yellow light, according to the Globe report.

Communities will be compensated for the costs of installation and operating the camera system. The state’s Transportation Trust Fund will receive the rest of the revenue from citations.

History of Opposition for Red Light Cameras in Massachusetts

Massachusetts has long opposed the idea of red light cameras due to privacy concerns. More than a decade ago, individual communities attempted to lobby state legislators for the right to install traffic cameras, without success.

But now, growing traffic safety concerns has rekindled proposals in Massachusetts and across the country.

Breakstone, White & Gluck provides aggressive and experienced representation to those injured or killed by the negligence of others. Our attorneys have been consistently recognized for their results for our clients, including as Top 100 New England Super Lawyers, Top 100 Massachusetts Super Lawyers and by Best Law Firms as a Tier 1 Firm in Personal Injury and Medical Malpractice in the Boston Metropolitan region.