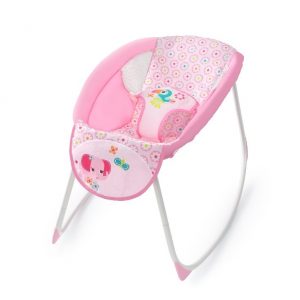 There is a new and frightening warning out about infant sleepers. This time, families are being urged to stop using Kids II infant rocking sleepers because they have been linked to the deaths of five infants. Kids II recalled its entire line of infant rocking sleepers on Friday – approximately 36 models and 694,000 individual products – just two weeks after the stunning Fisher-Price recall.

Fisher-Price recalled 4.7 million of its Rock ‘n Play sleepers on April 12, after an investigation linked the product to more than 30 deaths over 10 years. This means that combined, the two companies sold more than 5.3 million defective sleepers to unknowing families.

Kids II introduced its sleepers in March 2012. Five infants have since died while using the sleepers after rolling from their back to their stomach while unrestrained or under other circumstances.

These sleepers were sold at Target, Walmart and Toys “R” Us as well as online, with a price tag of $40-$80. Parents and grandparents who own one should stop using the Kids II sleepers and contact the company for a recall or a voucher to use toward another product. Parents can call Kids II toll-free at 1-866-869-7954 8:00 a.m.to 5:00 p.m. ET Monday through Friday or visit the company’s website.

Read the Consumer Product Safety Commission’s recall notice for a full list of the recalled sleepers. One of the models was sold with Disney branding.

In the Fisher-Price case, the Consumer Product Safety Commission and the company, which is part of Mattel, initially announced the sleeper had been linked to at least 10 deaths in early April. The company said the deaths all involved children who were 3 months or older. The company’s remedy was for parents to stop using the rocker when children turned 3 months old or became capable of turning themselves over.

Soon after began the calls for a recall. Consumer Reports and the American Academy of Pediatrics (AAP) were the leading advocates in both the Fisher-Price and Kids II sleeper recalls. Both products put children in canopy-like sleeper, which can rock to music and is highly likely to move if an infant can. The AAP warns the rocking sleepers are unsafe and create a risk for suffocation and strangulation. The academy advises that infants should only sleep on flat surfaces such as cribs or bassinets. The sleeping surface should be free of soft bedding, toys and other products.

After Friday’s recall, Consumer Reports asked the Consumer Product Safety Commission if the agency intends to recall all sleepers on the market. An agency spokesperson said it continues to actively investigate sleep products and was “reassessing the product class and hazards associated with it.” Meanwhile, Mattel has announced the Fisher-Price recall will cost the company $27.3 for the quarter ending March 31, 2019. But the recall won’t entirely remove the sleeper from homes. According to Consumer Reports, Fisher-Price sells the same product in Canada, but markets it as a “soothing seat.”

About Breakstone, White & Gluck – Boston Product Liability Attorneys
Breakstone, White & Gluck is a Boston personal injury law firm which represents individuals who have been injured by unsafe products. When a product has caused injury, there should be an investigation to determine the cause, which often falls under three categories: defective design, manufacturing error or a failure to warn consumers about the potential for injury. If someone in your family has been injured by a defective product, learn your rights. Contact our Boston product liability lawyers at 800-379-1244 or 617-723-7676 or use our contact form.