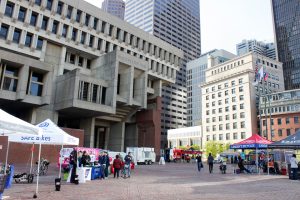 Breakstone, White & Gluck is pleased to participate in the National Bike to Work Day Festival on Boston City Hall Plaza this Friday. The festival is hosted by the City of Boston, which says, “We think it’s important to celebrate everyone who rides in Boston, and we want to make it easier for new riders to start commuting.”

Breakstone, White & Gluck couldn’t agree more. We will be attending for the third year. Stop by and say hello to Attorney David W. White at our Project KidSafe tent. David will be answering safety questions and sharing information about our Project KidSafe campaign. Over the past four years, Breakstone, White & Gluck has donated over 10,000 bicycle helmets to children in Massachusetts, with a goal of protecting young cyclists from serious head injuries. Under Massachusetts law, cyclists 16 years old and younger are required to wear helmets, but many children do not and are at risk.

We are donating an additional 4,000 helmets in the Boston area in 2017, all through community organizations. Many helmets will be donated in the city of Boston, including through the Boston Police Department and Boston Bikes’ Roll It Forward, a city program.

The Bike to Work Day Festival is part of Bay State Bike Week, a statewide lineup of cycling events which began May 13. Events continue through Sunday, May 21.

Highlighted Events
MassCommute Bicycle Challenge (MCBC)
For the 23rd year, cyclists can compete in the MassCommute Bicycle Challenge. Cyclists who log their miles each day are eligible for daily prizes. Cyclists can compete individually or on teams organized by employer. The goal is to count just how many miles cyclists are logging. Last year was a record breaker, with 156,285 miles traveled.

If you can’t participate, we still encourage you to check out the MassCommute Bicycle Challenge website.

Seaport Common Bike Tune-Up. In Boston, cyclists can take advantage of free bike tune-ups at Seaport Common starting at 7:30 a.m. Tune-ups are on a first come, first serve basis and the event is organized by the Seaport TMA, a nonprofit transportation management association.

Bike Breakfast. Bike commuters are also invited to stop by for a light breakfast and refreshments at the MassDOT building at 10 Park Plaza in Boston. Event starts at 7:30 a.m.

Thursday Events
Cambridge-Lexington Bike Caravan. If you are new to bike commuting, this is an event for you. The event starts at 1 Kendall Square in Cambridge at 7:30 a.m. Cyclists will commute down the Minuteman Bikeway to Somerville, Arlington and Lexington.

Waltham Night Ride. Join this short ride in Waltham, starting at 8 p.m. at Waltham City Hall. Minimal lights will be distributed to participants who need one for a $5 donation.

Boston Bike Commuter Numbers are Growing
We hope you can participate in an event this week. Over the past few years, Boston has seen a tremendous surge in bike commuters. According to 2015 US Census data, the number of Boston residents who regularly commute by bicycle more than tripled in a decade. Some 8,100 Boston residents pedaled to work in 2015, compared to 2,300 in 2005. Bay State Bike Week provides cyclists a good opportunity to learn more about safe riding.