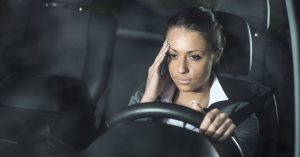 Researchers asked students how to reverse this trend. Students saw hope in creating public awareness campaigns for social media and billboards. Students supported the creation of materials which showed emotional portrayals of accidents and the impact of sleep deprivation on driving in different stages.

But researchers noted the biggest deterrent may be fear. Students said they would change their ways if they were stopped by a police officer.

This was a small study of just 26 students. But past studies have showed similar and even stronger results. Another 2016 study of 450 college students reported more than 70 percent of students had driven drowsy, including 40 percent in the past year and 30 percent in the last month.

Driving While Drowsy in Massachusetts
Massachusetts has worked to address the problem of young drivers operating while fatigued through its Junior Operator Law. Passed in 2007, the Junior Operator Law places certain restrictions on new drivers who are 16 1/2 to 18 years old. Unless they are with a parent, junior operators are not allowed to drive between 12:30 a.m. and 5 a.m.

Massachusetts lawmakers have tried to pass a law establishing a drowsy driving prevention week (a few other states have already passed these laws).

Just two states – Arkansas and New Jersey – have specific laws creating criminal penalties for fatigued driving, if police can meet the burden of proof. Drowsy driving can be a challenge for law enforcement – and lawyers – to prove. Drivers can wake up quickly with the red and blue lights of a police car. And there is no breathalyzer for a sleepy driver.

In Massachusetts, drivers who fall asleep behind the wheel may be cited for a related traffic violation if they cause an accident, such as a marked lanes violation if they cross the yellow line after dozing off. Drivers who fall asleep behind the wheel can also be held responsible in a civil lawsuit and have to pay damages if someone is injured or killed.

Do everything you can to prevent a drowsy driving accident. Talk to your college student and help them manage their sleep. Do the same for yourself and only drive when you are rested.

If you have been injured, learn your legal rights for seeking compensation. For a free legal consultation, call 800-379-1244 or use our contact form.