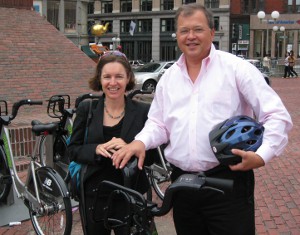 David White, one of the attorneys at Breakstone, White & Gluck, called these efforts “great steps to making Boston a safer place to ride your bicycle.” The program will also reduce pollution and promote fitness.

White explained, “Cycling becomes much safer as motorists become more aware of bicycles sharing the roadways. Populating the city with hundreds more bicycles will actually increase safety for all bicyclists.”

White urges Boston cyclists to observe Massachusetts bicycle laws (read more here). He also urges cyclists to check their automobile insurance policies to make sure they have adequate uninsured and underinsured motorist coverage, which provides protection if there is a bicycle accident (read more here).

Congratulations to the City of Boston and Hubway!