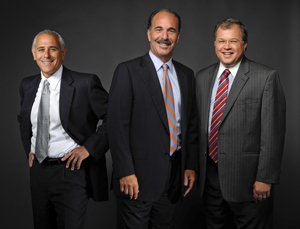 Our partners, Marc L. Breakstone, David W. White and Ronald E. Gluck, have been selected to various 2015 Massachusetts Super Lawyers lists, for their work in the practice areas of personal injury and medical malpractice.

We are pleased to announce this honor. This is the 12th year in a row our attorneys have been selected to various Super Lawyers lists, a recognition of excellence. Super Lawyers, part of the Thomson Reuters company, makes annual selections using a multi-phase process of peer nominations, independent research and attorney evaluations. It only recognizes 5 percent of attorneys in each state.

The Massachusetts Super Lawyers lists are published online and in the November issue of Boston Magazine. You can also read more about our attorneys here:

A graduate of Northeastern University School of Law, Attorney Breakstone has been practicing in Boston since 1986. He has represented clients who have been seriously injured by negligence, including in cases of wrongful death, medical malpractice, bus and truck accidents and propane gas explosions. Read his bio.

Attorney White is a Northeastern University School of Law graduate and has 30 years of experience representing victims of personal injury and insurance bad faith cases in Massachusetts. He is a past president of the Massachusetts Bar Association.

Attorney Gluck has consistently been named to the Massachusetts Super Lawyers list each year since 2005. He is a graduate of Boston College and Case Western Reserve University School of Law. Over his career, he has represented clients who have been seriously injured in complex cases involving wrongful death, car and trucking accidents, bicycle accidents, motorcycle accidents, liquor liability and product liability.

After 9-11, he represented victims of the World Trade Center attacks. He has also served as an expert witness on behalf of the United States Justice Department. Read his bio.