Baby boomers are taking to the open road on motorcycles at greater rates than ever before and as they do, their personal injuries and fatalities resulting from motorcyle accidents are increasing.

The American Motorcyclist Association reports its average membership age is now 48. The Motorcycle Industry Council trade association, meanwhile, reports the average age of all motorcycle owners increased from 33 to 40 years old between 1998 and 2003. 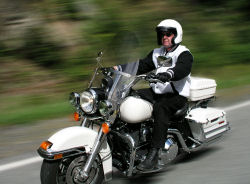 The Massachusetts Department of Public Health reports the rate of motorcycle-related deaths and injuries in the state for riders between 55 and 64 quadrupled between 1998 and 2007.  Additionally, although nationally there was a decline in motorcycle related fatalities regardless of age, Massachusetts experienced an increase in fatal motorcycle crashes.

The state Department of Public Health is not the only one to notice a correlation between age and severity of injury.  Researchers at the University of Rochester Medical Center recently found that motorcyclists over the age of 40 sustained more serious personal injuries, spent more time in the hospital, and were up to twice as likely to die from a motorcycle accident than riders under 40.

Dr. Mark Gestring, the lead author of the study and director of the trauma center, noticed older riders and more severe injuries in the emergency room.  His research team examined records in the National Trauma Databank and noted several disturbing trends:

The Johns Hopkins Bloomberg School of Public Health found a 145% increase from 2000 to 2006 in death rates for motorcyclists over 65.

Doctors report that there are several factors accounting for the increased severity and fatality of injuries sustained by older riders.  First, older riders have less resilient skin, bones and blood vessels and cannot handle as much physical trauma as their younger counterparts.  Additionally, older riders come into the hospital with more preexisting heath problems and take more medications that can complicate injuries.

For assistance with a case involving a motor vehicle or motorcycle accident, contact the experienced attorneys at Breakstone,White & Gluck. Call 800-379-1244 to consult with an experienced and professional lawyer.