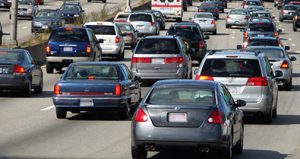 Fatal car crashes in the U.S. rose more than 5 percent in 2016, according to the National Highway Traffic Safety Administration.

The roads were far more dangerous in 2016, with 37,461 people killed in motor vehicle crashes across the U.S. This represents a 5.6 percent increase over 2015. Passenger and motorcyclist deaths reached an 8-year high. More cyclists and pedestrians were killed than in any year since the early 1990s.

Rise in Passenger Deaths
Last year brought the most passenger deaths in the U.S. since 2008. There was a 4.7 percent increase – or 1,075 more lives lost – over 2015. This counts passengers of passenger cars, SUVs, vans and pick-up trucks. Passengers were only wearing seatbelts in 48 percent of car accidents where seat belt status was known, even though 49 of 50 states have seat belt laws. All 50 states have child passenger safety seat laws.

A good reason to wear a seatbelt: nearly 90 percent of victims who survived fatal daytime crashes last year were buckled in. About 84 percent of nighttime crash survivors were wearing seatbelts.

In Massachusetts, the law requires drivers and passengers to wear seat belts. This law is M.G.L. c.90 § 13A.

Teens Involved in Fatal Crashes Rise
Drivers age 16 to 20 were involved in 3.6 more fatal crashes in 2016. The actual number of young drivers who died was up .1 percent. But there were 3.6 percent more young drivers, ages 16 to 20, involved in fatal vehicle crashes last year.

About Breakstone, White & Gluck
The Boston car accident lawyers of Breakstone, White & Gluck have over 100 years combined experience representing those who have been injured by negligent or reckless driving. Our attorneys provide aggressive representation and represent those who have been injured by car accidents across Massachusetts, including in Boston, Cambridge, Somerville, Arlington, Waltham and Quincy. If you have been injured, contact our firm for a free legal consultation. Call us at 800-379-1244 or 617-723-7676 or use our contact form.