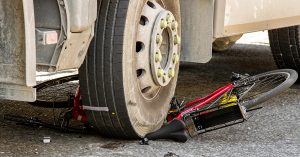 Massachusetts lawmakers have been asked to approve legislation to protect cyclists from serious and fatal injuries caused by large truck crashes.

“An Act to Reduce Traffic Fatalities,” would in part require state-contracted trucks to be outfitted with safety sideguards, crossover mirrors, convex mirrors and blind-spot decals to reduce the risk of cyclists being swept underneath the tall carriage of large vehicles. These sideswipe truck accidents are often fatal for cyclists and pedestrians. Meanwhile, the convex mirrors would help expand a truck driver’s view of cyclists. The version of the bill proposed in the House of Representatives would also require use of backup cameras.

The bill numbers are  HD.1888 and SD.1613. More on the bill and others proposed this session can be found on the MassBike website.

For Safety, Cities in Massachusetts and Other States Have Already Started Mandating Sideguards

This is not the first time truck sideguards have been proposed in the Massachusetts Legislature or local communities. In 2014, the City of Boston passed the first sideguard ordinance in the nation, requiring sideguards, crossover mirrors, convex mirrors and blind-spot awareness decals on city-contracted trucks. Somerville and Cambridge have also pursued their own bylaws and ordinances to protect cyclists, pedestrians and others against injury. The City of Cambridge initially approved an ordinance for city-owned trucks, then discussed extending the requirement to city-contracted trucks in 2019, after two fatal bike crashes the previous year, according to Wicked Local Cambridge. One of the cyclists was hit by a subcontractor working on a city paving project at the intersection of Monsignor O’Brien Highway and Museum Way. We do not have an update on whether the city changed its ordinance.

Beyond Massachusetts, Washington D.C. and Portland, Oregon have passed truck sideguard ordinances. Portland has had an ordinance in place since 2019, following the death of at least 22 people in heavy-weight truck accidents in the previous four years, according to the city website.

On average, 26 pedestrians and 22 cyclists are killed in truck collisions with the left and right side of large commercial trucks in the U.S. This is according to a May 2020 report on truck sideguards published by the U.S. Department of Transportation Federal Motor Carrier Association (U.S. DOT).

But the dangers of large trucks are much greater when you factor in cyclists who survive serious truck crash injuries.

Sideguards are just one step toward protecting cyclists. They may prevent a cyclist from being swept under a commercial truck, tractor trailer or trash truck. But sideguards cannot protect against all bicycle accidents. It is essential that drivers also operate with reasonable care, check for cyclists and use their mirrors. At intersections, commercial truck drivers have a responsibility to check left, right, front and back for cyclists. We can’t stress the importance of this.

While this may sound like an easy task, it is actually a unique sequence. Think about it. Drivers generally check front and back for other drivers who are traveling in the same lane and in nearby areas. By contrast, cyclists are usually traveling in the same direction, on the right side of the road or incoming from other parts of the intersection. They are often approaching trucks from behind, then meet parallel at an intersection or stop.

Cyclists are also allowed to travel in the center lane when they need to do so for safety, a common move at intersections. This is because of the chance a truck may overtake a cyclist making a right turn in the bike lane or on the side of the road. When this happens, cyclists can become trapped underneath in the absence of sideguards. Even with sideguards, a truck can collide with the cyclist from the side, causing a forceful and fatal collision sending a cyclist into sidewalks and curbs, vehicles parked on the side of the road or in the middle of the intersection. This is known as a right-hand hook crash.

In addition to sideguards and convex mirrors, backup cameras have become the leading safety tool for all drivers in recent years. The right one can also contribute to safer encounters with cyclists.

The bicycle accident attorneys at Breakstone, White & Gluck have extensive experience pursuing financial compensation for cyclists injured in bicycle accidents involving large trucks and vehicles. If you have been injured, the cause may have been a driver’s negligence or a truck’s defective mechanical system. It is vital that you or a family member report the bicycle accident right away to police and consult with an experienced attorney.

Breakstone, White & Gluck has represented clients injured by negligence in Massachusetts since 1992, including in Boston, Cambridge and Somerville; Plymouth and Brockton; the South Shore, Cape Cod, Framingham, Worcester, and Lawrence, Danvers and Newburyport and Gloucester on the North Shore.