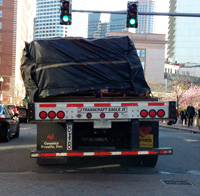 On Monday morning, a tractor-trailer carrying 11,000 gallons of gasoline overturned in Fall River, engulfing in fire and requiring some to be evacuated. The driver was treated for non-life threatening injuries and the crash is still being investigated.

About Breakstone, White & Gluck
Our Boston truck accident lawyers have over 100 years combined experience representing individuals injured in tractor-trailer and commercial truck accidents. If you have been injured, learn your rights for seeking compensation. For a free legal consultation, contact us toll-free at 800-379-1244 or 617-723-7676 or use our contact form.