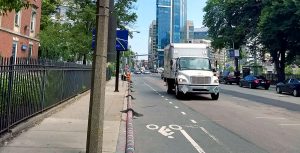 A truck travels along Brookline Avenue in Boston last summer, near the site of a fatal truck crash killing a cyclist last week.

It was heart-breaking to watch the TV news coverage last week, the scenes following a cement truck crash which killed a cyclist in Boston’s Fenway neighborhood. The 69-year-old victim, a librarian in Brookline, was hit at the intersection of Brookline Avenue and Park Drive on Friday afternoon.

As State Police investigate the fatal bicycle accident, we should all be concerned about trucks. If you are a pedestrian or cyclist in Boston or Cambridge, you have likely witnessed a truck crash or near crash. Or felt the sheer terror of a truck too close.

At times, it is hard not to travel in fear of trucks in Massachusetts, especially in Boston and Cambridge. One very upsetting moment came earlier this month, when a city truck reportedly plowed over a sidewalk in Chinatown, hitting a pedestrian. The truck ultimately smashed into the side of Liu Yi Shou Hotspot Boston, which is located at Washington and Kneeland streets, near Tufts Medical Center. The pedestrian was treated for non-life threatening injuries while the restaurant sustained heavy structural damage.

Because trucks are heavy-weight vehicles, drivers must be properly trained and use reasonable care when operating. Just as in Chinatown, truck crashes can cause injuries to pedestrians. Cyclists are also vulnerable, especially when crossing intersections near trucks.

In Massachusetts, the law specifically addresses a truck driver’s responsibility when making right turns at intersections near cyclists. Truck drivers must make the turn at a “safe distance,” at a “speed that is reasonable and proper,” according to the law. To do this in Boston, truck drivers have to check. Large vehicles are set up much higher than cyclists. Drivers need to use mirrors and specifically looking down at the bike lane before turning.

When a driver neglects to check, there can be serious consequences. They can end up cutting a cyclist off in a right hook accident. This can lead to severe injuries and often death.

Our attorneys have extensive experience in investigating truck crashes which have seriously injured or killed cyclists.

Last year, Attorney Ron Gluck of Breakstone, White & Gluck settled a wrongful death lawsuit on behalf of a cyclist who was killed by a truck driver in a hit-and-run crash. The driver hit our 38-year-old client at the intersection of Massachusetts Avenue and Beacon Street. Read about the case in Boston Magazine.

How Cyclists Are Being Injured By Trucks

The numbers change when you look at fatal accidents involving large trucks and cyclists. While 48 percent of cyclists who died were hit from the front of large trucks, 22 percent were struck by the right side of a truck, while 9 percent were hit on the left side. Another 7 percent were by the back of the truck.

Some cities and states want to encourage truck safety by passing ordinances that require trucks to be equipped with side guards. This covers the area between a truck’s wheels, where cyclists and pedestrians can become trapped. Two cities in Massachusetts have already passed ordinances for city-contracted trucks and large vehicles. The ordinances also require trucks to use convex mirrors to help them see blind spots.

Boston was the first U.S. city to pass an ordinance in 2014. Somerville has since followed, passing the Somerville Ordinance to Safeguard Vulnerable Road Users. A statewide law could be next. A proposal now on Beacon Hill is asking lawmakers to mandate side guards on all city- and state-owned vehicles by 2020. Contractors would be required to meet the new standard by 2022.