Attorney Marc L. Breakstone was quoted in a front-page Massachusetts Lawyers Weekly article about common law liability for injuries caused by sidewalk defects. The current common-law standard dates back centuries and prohibits many plaintiffs from recovering compensation for injuries. But a recent Appeals Court ruling may have finally set the stage for change.

Attorney Breakstone welcomes the idea. “I think that the common law is a living body of principles that has to evolve as social conditions and the realities of life evolve,” he said. 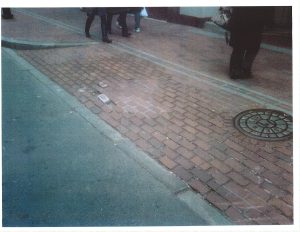 Earlier this month, the Appeals Court ruled in the case of Halbach, et al. v. Normandy Real Estate Partners, et al., concurring that a Superior Court judge had correctly granted summary judgment to the defendant, 100 & 200 Clarendon LLC, which operated, leased and maintained the John Hancock Tower and a neighboring garage in Boston.

The Appeals Court rejected the plaintiffs’ argument that the defendant had been negligent in keeping the sidewalk free from defects and had failed to uphold their duty “to ensure a safe pedestrian walkway.”

The Appeals Court said the plaintiffs were suggesting “an entirely new duty” not recognized by state common law. The Appeals Court further noted that there is no affirmative duty to inspect and repair public sidewalks or notify the city.

In Massachusetts, cities generally have limited liability of $5,000 for personal injuries and property damage from defective ways, which also leaves plaintiffs who are injured with limited remedy.

In 2009, a man fell on uneven sidewalk after leaving his office at the John Hancock Tower in Boston. He suffered a bilateral rupture of his quadriceps tendon. After the fall, the defendant, 100 & 200 Clarendon LLC, did make some repairs, with no attempt to seek reimbursement from the city of Boston.

The man and his wife filed a lawsuit in Suffolk Superior Court in February 2012 and filed a motion for summary judgment in January 2014.

Appeals Court Judge James R. Milkey wrote that “the plaintiffs have a more forceful case for … a change in the law than the majority opinion suggests.”

The Supreme Judicial Court could now review the Appeals Court ruling and decide whether to extend a duty for sidewalks to private owners.

Attorney Breakstone told Massachusetts Lawyers Weekly this would be a “baby step for the evolution of our tort law.” It is a widely accepted principle that businesses making a profit from the customers they attract onto their premises have to provide safe egress, he said.

In 2010, the Supreme Judicial Court decision in Papadopoulos v. Target Corp. abolished the common-law distinction between natural and artificial accumulation of snow and ice. In Massachusetts, property owners are now responsible for clearing all areas of their property under the standard of “reasonable care,” regardless of whether they created the snow pile or if it naturally formed.

About Breakstone, White & Gluck
The Boston personal injury attorneys at Breakstone, White & Gluck have over 100 years combined experience handling personal injury and premises liability cases for those who have been seriously injured. If you have been injured, it is important to learn your rights. For a free legal consultation, contact us at 800-379-1244 or 617-723-7676 or use our contact form.