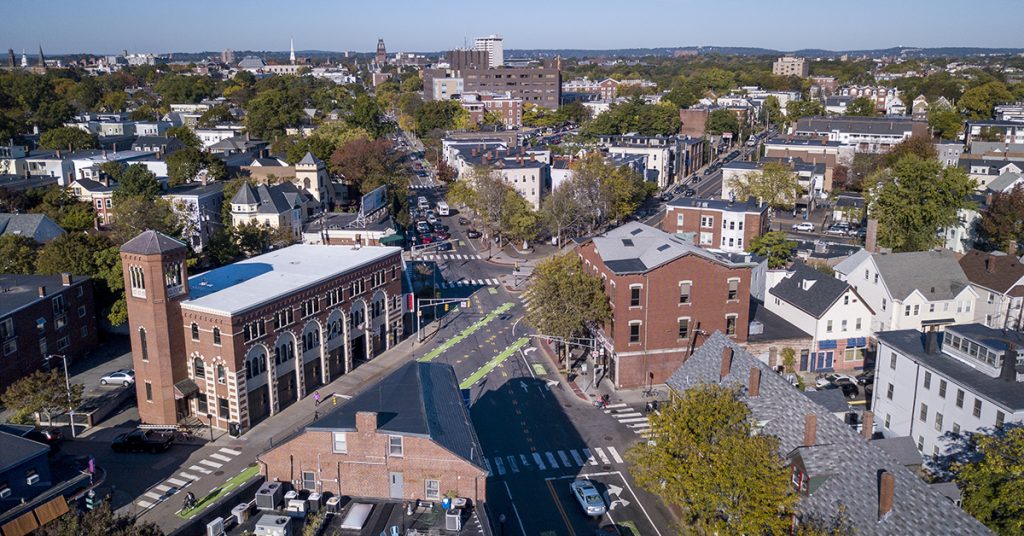 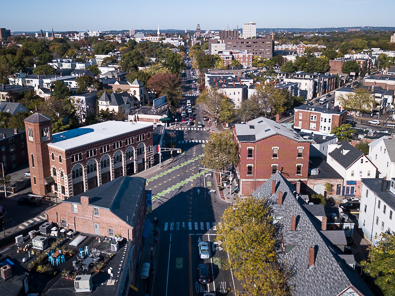 View from Inman Square, Cambridge, once ranked the top bike crash site in Massachusetts, according to MassDOT crash data. Photo: 2017, after installation of new bike lanes.

But cyclists felt there was more work to do. They recently asked the Cambridge City Council to prioritize areas for protected bike lane development, add new roads and establish a deadline for improvements.

The vote comes several weeks after a cyclist was killed in Harvard Square. In August, a large tractor-trailer struck and killed the male cyclist on Massachusetts Avenue, near Brattle Street. Just a year ago, in September 2019, another bicycle accident resulted in a female cyclist’s death in the area.  A devastated family member later wrote a guest column in a local newspaper, urging the city to make safety improvements in Harvard Square.

The City of Cambridge has been studying traffic in congested Harvard Square. After the cyclist’s death in August, a city official stated Cambridge will add a separated bike lane and reduce travel lanes on Massachusetts Avenue, between the Harvard Square Kiosk and Harvard Square (Source: The Boston Herald, August 26, 2020).

Harvard Square is known for historic buildings and iconic shops, such as The Coop, the Harvard University bookstore. Adjacent to Harvard Yard and Harvard University, the square is located at the intersection of Massachusetts Avenue, Brattle Street and John F. Kennedy Street. The MBTA red line stops there and pedestrians and cyclists are in close proximity to motor vehicle traffic, buses and trucks.

The Cambridge Bicycle Safety, a volunteer group, has led the effort for expanding protected bike lanes across the city. Its announcement noted this was the first mandatory timeline for building a bike lane network in the United States.

Safety is a leading concern for cyclists in Cambridge. Between residents and commuters, Cambridge has a high number of cyclists. When cyclists have been injured or killed in traffic accidents, many people have felt the impact. There has been a strong response in each case.

In June 2016, a 27-year-old cyclist was tragically hit and killed in a bicycle crash in Inman Square. The woman was struck by a Jeep Cherokee’s open door, then pushed into the travel lane, where she was ultimately struck by a moving dump truck, according to Wicked Local Cambridge. She was pronounced dead a short time later at Massachusetts General Hospital.

Then, in October 2016, a cyclist was fatally injured in Porter Square. The cyclist was struck by a tractor-trailer and a sedan during a morning ride. He was pronounced dead at the scene.

After these crashes, a Cambridge resident campaigned to encourage drivers to use the Dutch Reach method before exiting their vehicles. This method encourages drivers to take a full look at the road from their seat, so they do not risk “dooring” a cyclist.

As a result of his campaign, the state of Massachusetts added instruction on the Dutch Reach method to the state driver’s manual to educate drivers.

Breakstone, White & Gluck is a Boston law firm which specializes in the representation of cyclists who have been injured by negligent drivers. Our attorneys offer more than 100 years combined experience handling all types of bicycle accidents, including truck crashes injuring cyclists, intersection bike accidents, right hook crashes and dooring. We help cyclists obtain compensation for recovery, including for medical care, lost wages and pain and suffering.

But our attorneys do more than represent cyclists. We are committed to improving safety for cyclists in the Boston area. We have long supported local cyclist clubs. And through our Project KidSafe campaign, we have donated 30,000 bicycle helmets to children across Massachusetts, including in partnership with the Cambridge Police Department. The League of American Bicyclists has honored us as a Silver-Level Bicycle Friendly Business.