Jonathan’s Sprouts of Rochester, MA, has widened the recall of its sprout products due to Salmonella contamination. The recall now includes all sell-by dates, including its conventional, organic, and bulk products. The recall includes other sprouts, such as radish, dill, and gourmet mix. Check below for stores where these products were sold. Do not eat them! Return them to the store for a refund. 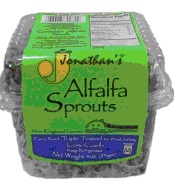 Salmonella, if ingested, can cause serious and sometimes fatal illness and infections in young children, frail or elderly people, and others with weakened immune systems. The symptoms of Salmonella include fever, diarrhea (possibly bloody), nausea, vomiting, and abdominal pain.

Jonathans Sprouts has issued an immediate recall of the following effected products:

Only these products with a sell-by date of 4/23/11 are affected by the recall.  If you have purchased any of these defective products, you are urged to return them to the place of purchase for a full refund.
The recall affects the following stores in Massachusetts: A&P, Grand Union, Stop & Shop, Shaws, Hannaford, Donnelans, Foodmaster, Truccis, and Roche Brothers.

END_OF_DOCUMENT_TOKEN_TO_BE_REPLACED

Maytag Corp. has recalled 1.7 million dishwashers across the United States, citing an electrical failure.The company, which is owned by Whirlpool Corp., issued the recall last week after 12 reports of electrical problems which pose a fire hazard.

“Product safety is a major concern here because we use our dishwashers daily,” said Boston product liability lawyer Marc L. Breakstone. “We advise consumers to immediately stop using the dishwashers and to have them repaired or to replace them as soon as possible.”

The 12 electrical failure reports included one case of extensive kitchen damage. No injuries have been reported in Massachusetts or other states.

The CPSC advised consumers to immediately stop using the recalled dishwashers and disconnect the electrical supply by shutting off the circuit breaker or pulling the fuse.

If you suspect your dishwasher’s involved in the product safety recall, click here for the full list of serial numbers and for how to obtain a refund or repair.

END_OF_DOCUMENT_TOKEN_TO_BE_REPLACED

The Food and Drug Administration is urging parents to choose generic children’s medications over Tylenol as it broadens its investigation into manufacturing facilities operated by Johnson & Johnson and its subsidiary, McNeil Consumer Healthcare.

New product safety concerns have arisen in the weeks after an April 30 recall involving McNeil’s Fort Washington facility in Pennsylvania, prompting the FDA to start investigating other manufacturing sites. McNeil recalled 43 over-the-counter children’s medicines it manufactures for Johnson & Johnson, including various flavors of liquid Tylenol, Motrin, Benadryl and Zyrtec. The FDA has not said how many facilities are being investigated.

Meanwhile, the House Committee on Oversight and Government Reform is scheduled on Thursday, May 27, 2010 to hold a hearing on the recent Tylenol recalls and whether McNeil properly handled consumer complaints.  In a recent Fortune Magazine interview, Johnson & Johnson Chief Executive William Weldon admitted that his company owed an apology.  Mr. Weldon has been invited to testify at the May 27 hearing.

The Pennsylvania facility has since been shut down but may resume operation once, according to Johnson & Johnson spokesman James Freeman, “we have taken the necessary corrective actions and can assure the quality of products made there”.

Tylenol has been involved in other product safety recalls in recent years. In 2008, McNeil recalled 51 types of Tylenol after consumer complaints of diarrhea, vomiting and other illness. The company said the medications – mostly all for children and infants – had been contaminated by trace amounts of a chemical used in shipping.

In 2008, McNeil recalled 21 types of children’s and infants’ Tylenolbliquid products, saying an active ingredient did not meet all quality standards.

For additional information on the Johnson & Johnson recalls, see the FDA’s website.

END_OF_DOCUMENT_TOKEN_TO_BE_REPLACED

The product safety recall impacts consumers in Massachusetts, the rest of the United States, U.S. territories and nine other countries.

“While Tylenol has historically been a safe and effective product for children, parents are urged to use particular caution in giving it to their children at this time based upon the information received from the FDA,” Boston attorney Ronald Gluck said.

McNeil has suspended production at the facility while the FDA investigates.

The recalled medicines include various flavors of liquid Tylenol, Motrin and Benadryl for children and infants. Several types of children’s Zyrtec were also recalled.

The FDA advised parents to ask their pharmacists for alternative medicine options and cautioned them against giving adult versions of medications to children. Consumers with the recalled medications can also obtain a refund or coupon from the McNeil Product Recall website.

McNeil has been involved with three major Tylenol recalls since 2008. In January, the company removed 51 types of Tylenol from the shelves after consumer complaints about vomiting, diarrhea and other symptoms. All but two of the recalled medications were for adults.The company said some of the medications had been contaminated by trace amounts of a chemical sometimes used for shipping and storage.

In 2008, McNeil recalled 21 types of children’s and infants’ Tylenol liquid products, saying an active ingredient did not meet all quality standards.
END_OF_DOCUMENT_TOKEN_TO_BE_REPLACED