If you are a property owner, today is a good time to inspect your driveway and walkways. Even if you worked hard to clear all the snow yesterday, go out and take a second look. The deep freeze is setting in and more snow is forecast for tomorrow, creating the potential for slip and fall accidents.

Why is this important? In addition to making it easier for your family to come and go from your home, you have a duty to use reasonable care to clear snow and ice under Massachusetts law. If you neglect this, you could be liable for any injuries that result. 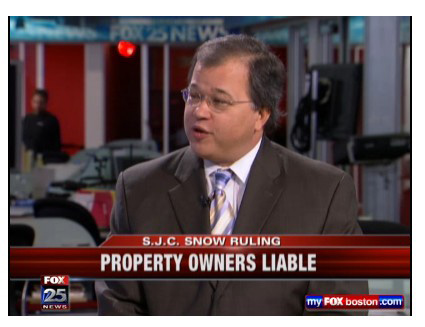 Massachusetts Law on Snow and Ice Removal The law for clearing your property is more strict than in past years. It changed in 2010, with the Massachusetts Supreme Judicial Court’s decision in Papadopoulos v. Target Corporation, SJC-10529 (July 26, 2010). View TV interviews from 2010/2011 in which attorney David White explains the law.

Prior to then, property owners were liable for injuries sustained on what was known as “unnatural accumulations” of snow or ice. Examples of this are gutters leaking onto sidewalks or snow piled on sidewalks.

The state’s high court changed the longstanding law so it falls in line with other states. Massachusetts property owners now have a responsibility to keep their premises in a reasonably safe condition and clear all snow and ice, whether it is a natural accumulation by Mother Nature or pushed there by a plow.

This law applies to homeowners as well as commercial property owners.

A few points to remember when it snows:

Safety
We all have to balance our legal responsibility to clear the snow with safety. It is hard work and tempting to take shortcuts at times. Remember a few basic safety rules. Do not start your snow blower in your garage or other covered areas. Before you shovel your driveway, clear your home’s heating vents so carbon monoxide does not build up in your home. Then, make sure you dress in layers and take breaks as needed.

The proposition is all too familiar: You or your children want to participate in an activity. It could be at school, for a sporting event, in connection with a walk-a-thon or bike-a-thon, or in some other activity where there is a risk involved. Maybe the event is really risky, such as learning to drive a race car, or learning how to rock climb. Part of the price of admission to all of these activities is your signature at the bottom of a release or waiver of liability.

The language of the typical release is usually very broad and even includes the requirement that you indemnify the organization against related claims. You will be binding not only yourself, but your family, and in the case of a wrongful death, your heirs.

Are they legal? Most of the time yes, though there are some important exceptions which will be discussed below.

The Massachusetts courts generally uphold the validity of releases and waivers that are entered into knowingly. This includes pre-accident releases as well as releases in connection with settlements. Our courts have repeatedly affirmed just how broadly Massachusetts law favors the enforcement of releases.

Simply put, a defendant ordinarily may “validly exempt itself from liability which it might subsequently incur as a result of its own negligence.” Lee v. Allied Sports Assocs., 349 Mass. 544 , 550 (1965) (car racetrack accident).

In the more recent case of Sharon v. City of Newton, 437 Mass. 99 (2002), the court enforced a release signed by a father on behalf of his daughter as a condition of her participation in cheerleading in her high school. After she was injured, the family brought suit for the school’s negligence. The release was raised as a defense, and the court strongly affirmed the enforceability of the release, citing a host of public policy arguments.

The requirements for a binding release include clear and conspicuous language, proper naming of the party, the signature of the party, and valid contractual “consideration.” Consideration, meaning something of value that is exchanged, is satisfied by the participation in the activity.

Some particularly disturbing releases seek to include third parties who may be related to the activity named in the release. For example, your school child may wish to participate in after-school volunteer activities, and the release required to participate may include all the companies participating in the program. Now assume something horrible–the contracting company had failed to screen its employees, and a dangerous criminal was employed and caused your child harm. The negligent hiring would likely be within the scope of the release.

There are some exceptions to enforceability of releases. There are certain statutory exceptions that apply. One exception (and it is one that is frequently violated) is a release of liability to join a gym or health club. G.L. c. 93, Section 80 makes such language unenforceable and, in fact, a violation of G.L. c. 93A, the Consumer Protection Act. If you are injured in a health club due to equipment failure, a defect on the premises, or the negligence of a staff person, you will be able to bring your claim. Here is a related blog on health club waivers and releases.

A release may be avoided, in part, if it is the result of a “mutual mistake.” In the exceptionally rare case of Leblanc v. Friedman, 53 Mass. App. Ct. 697 (2002), a settlement release was not a complete bar to a subsequent claim by the plaintiff. The plaintiff settled a medical malpractice case arising from an instrument left in her body, and although the release was worded broadly, the court found there was a question of fact whether it was meant to include another injury not described in the release itself.

What Should You Do?
Entering into a release is an important contractual event. You should consider whether the reward overrides the risk. Some pre-enrollment due diligence is a good idea–ask about the staff involved, inspect the premises, get some references. If you are not willing to release all of your claims, try crossing out the offending language or simply not signing the release. However, most organizations are wise enough to recognize and disallow both of those techniques.

It would be appropriate for the Massachusetts legislature to consider revising the law of pre-accident releases. Sadly, that day does not look likely to come any time soon.

Our Practice
The lawyers at the Boston, Massachusetts firm of Breakstone, White & Gluck represent clients who have suffered personal injury as a result of the negligence of others. We have had experience identifying unenforceable releases which has allowed our clients to proceed with their claims for compensation. For more information and a free consultation, contact us today at 800-379-1244 or 617-723-7676 or use our contact form.

Nov. 4 is when we turn back the clocks, the usual sad good-bye to another summer and fall. At Breakstone, White & Gluck, we suggest taking a few of the extra minutes you gained to replace the batteries in your home’s smoke alarms and carbon monoxide detectors. Check whether the devices are working properly and replace them if needed.

Smoke Alarms
Massachusetts requires a smoke alarm be installed on every habitable level of a residence as well as on the basement floor. The law requires two types of smoke alarms: photoelectric and ionization. Only photoelectric smoke detectors are to be installed within 20 feet of kitchens and bathrooms with showers. Ionization alarms are more sensitive and more likely to be disabled in these areas. Outside the 20-foot zone, both photoelectric and ionization alarms are required.

Carbon Monoxide Detectors
Carbon monoxide is a colorless, odorless, tasteless gas which can emerge without any warning. In a home, it could be caused by a gas leak in a furnace or other appliance. Early symptoms may include headache and dizziness, though inhalation can quickly lead to serious injuries, seizures, comas and death.

If you have questions, your local fire department is a good resource for information, along with the manufacturer of your devices.
END_OF_DOCUMENT_TOKEN_TO_BE_REPLACED

Massachusetts has banned the commercial use and sale of lacquer sealer, a highly flammable wood floor finishing product linked to deadly home fires.

Gov. Deval Patrick signed the safety bill into law this week. The bill had strong support from MassCOSH (the Massachusetts Coalition for Occupational Safety and Health), which convened a Floor Finishing Safety Task Force to investigate the problem.

The task force was convened after a 2004 house fire in Somerville claimed the lives of two Vietnamese floor sanders and burned their co-workers. Shortly after, a Vietnamese flooring contractor died in a Hull house fire. Both fires involved the use of lacquer sealer used in floor finishing.

“This groundbreaking law will save lives and end floor finishing fires that have caused so much pain and destruction,” said Marcy Goldstein-Gelb, executive director of MassCOSH. “We owe a great deal of thanks to the Governor and Legislature for recognizing these grave dangers and taking action to protect workers and residents.”

Following the three fatal fires, the Floor Finishing Safety Task Force issued a 2005 report stating Boston had seen 25 fires involving lacquer sealer over the 10 previous years and Needham had seen two in the prior year that threatened worker safety.

In the 2005 report, the task force recommended the state promote use of non-flammable water-based finishers to protect Massachusetts worker safety and prevent worker deaths.

The task force observed the problem of flammable lacquer sealer was targeting Massachusetts’ Vietnamese community, which has a large concentration of workers in the floor finishing industry.

Breakstone, White & Gluck of Boston is a supporter of MassCOSH and its work to protect Massachusetts construction workers and other employees.