Attorney David W. White and Attorney Marc L. Breakstone were back on Boston City Hall Plaza on May 17th, as Boston celebrated Bike to Work Day. This was our 5th year out on City Hall Plaza during Bike Week. Attorney White fitted about 70 helmets for cyclists over two hours and we got a special surprise – getting to meet Tim Wakefield! He was nice enough to sign one of our Project KidSafe helmets. We also got to visit with other friends, including Lee Toma of Bike Milton and Galen Mook, executive director of MassBike. 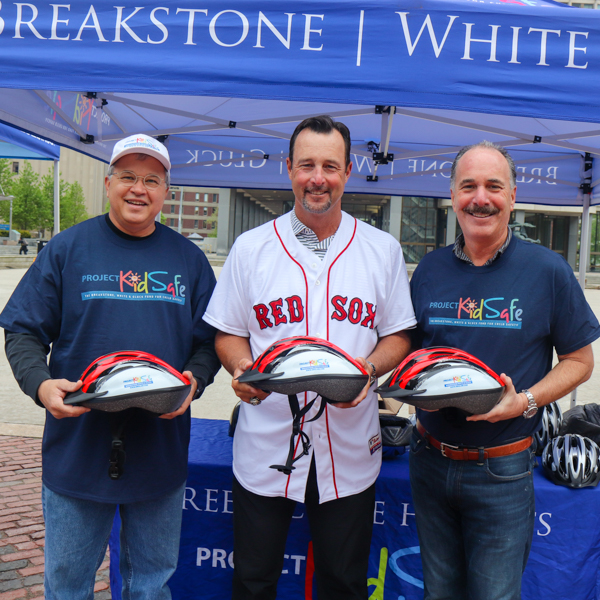 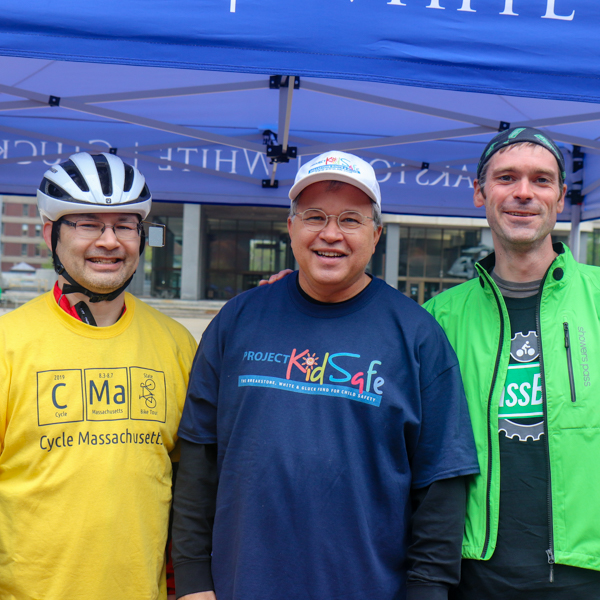 Our reminder to cyclists: Inspect your helmet regularly to make sure it’s in riding condition. As a rule, replace your helmet at least once every three years; you may need to do this sooner, especially if you ride every day. And always replace your helmet immediately if you are involved in a bicycle accident or fall. Please visit this website for more bicycle helmet safety tips.

Breakstone, White & Gluck was pleased to donate 200 bicycle helmets to the Cambridge Police Department for the fourth year. Attorney David W. White and Attorney Ronald E. Gluck recently visited with Cambridge police officers who work to educate the public about bicycle safety laws on a daily basis. The City of Cambridge works to promote bicycle safety and has been recognized as a Gold-Level Bicycle Friendly Community by the League of American Bicyclists. More than 100 Cambridge police officers – or more than one third of the city’s 282 sworn in officers – have been trained on bike patrol to help keep roads safe.

The City of Cambridge announced our donation during Bay State Bike Week. 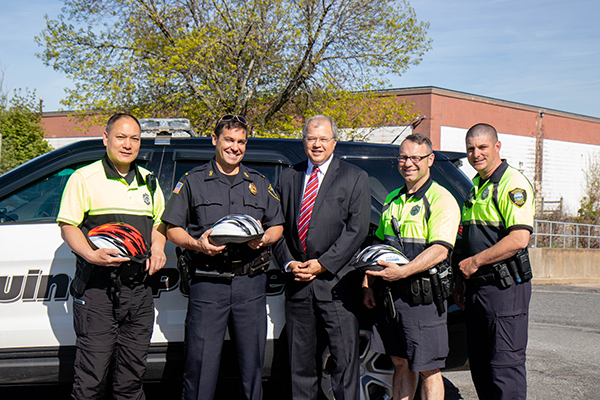 For the third year, Breakstone, White & Gluck is pleased to partner with the Quincy Police Department to encourage bike safety in the city. Quincy Police announced our donation of 200 bicycle helmets during Bay State Bike Week. Officers will use the helmets to benefit children through community programming. Each year, some of the helmets are given away through programs such as the annual DARE camp for 5th graders. Other helmets are given away at smaller gatherings, such as Coffee with a Cop, a program that allows residents to meet police officers and share their concerns and questions in an informal setting. Read the announcement on the Quincy Police Department website.

For the fourth year, Breakstone, White & Gluck donated more than 100 children’s bicycle helmets to the Everett Police Department. Officers gave away the helmets free to children and families at the Kids to Park Day at the Swan Street Park on May 18th.

Breakstone, White & Gluck has been recognized as one of the best personal injury law firms in Boston, by our clients, other lawyers and attorney rating services, such as Super Lawyers, U.S. News Best Lawyers and Martindale-Hubbell. Our attorneys have also been recognized for our Project KidSafe campaign by the League of American Bicyclists, which has named Breakstone, White & Gluck a Silver Level Bicycle Friendly Business. This is a special recognition. Just 36 businesses have been earned recognition in Massachusetts and just two law firms across New England.

We have also been recognized by the City of Boston, where we have donated helmets to various programs, including Boston Bike to Work Day, along with Boston Bikes’ Roll It Forward, Boston Bikes’ youth instruction programs and the Boston Police Department. Attorney David W. White has volunteered his time fitting helmets and Boston Bikes has recognized him as a Volunteer of the Year.