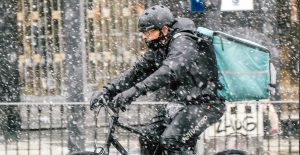 In Boston, drivers can take extra caution when traveling near a cyclist during winter.

Gone are the days when drivers only had to watch for cyclists during the warm weather in Massachusetts. Cyclists have become a fixture on our roads year-round in Boston, including in January and as the pandemic continues.

As a driver, we urge you to slow down this winter and look for cyclists. Also give cyclists extra room so they can respond to a traffic situation without wiping out or being struck in a bicycle accident.

While most cyclists try to avoid stormy weather, there are times when cyclists still find themselves riding in slippery or snowy situations.  Also remember that days after a snow fall, snow plows can make another pass at roads and parking lots, which can interfere with a cyclist’s path as well as pedestrians, cars and delivery trucks.

If you fail to check for cyclists, you could cause a cyclist a life-threatening injury and be held financial liable by the victim. Do all you can to avoid causing a cycling accident. Take a few minutes to ask a cyclist about the challenges they face on the road, continuously check for cyclists while you drive and always assume there will be cyclists on the road.

Massachusetts Bicycle Laws. In Massachusetts, cyclists have rights and responsibilities. One of the first rights concerns where cyclists can ride. Under M.G.L. c. 85, § 11B, cyclists are allowed to ride in a bike lane, on the side of the road or in the main traffic lane. Up to two cyclists can ride abreast in the main traffic lane. Cyclists should travel in the same direction as traffic.

When you see a cyclist, remember they can switch lanes or turn at any time. They may not always be able to safely use hand signals. Likewise, if you find yourself behind a bicycle and they are blocking traffic, you should practice patience or take another route.

Common Bicycle Injuries. Cyclists are vulnerable on the roads, traveling between motorized cars, trucks and other vehicles. A cyclist can be injured when a driver makes an error at an intersection or cuts the cyclist off when turning.

When a truck turns at an intersection, the driver has a responsibility to check for a cyclist before turning right. Truck drivers who neglect this step can cause a fatal crash injuring a cyclist. This is often called a “right hook” crash.

Another type of bicycle crash is called a “left hook” accident. This type of collision happens when a vehicle travels straight or turns left at an intersection, cutting off or colliding with a cyclist at an intersection. The cyclist is usually traveling in another direction.

By simply remembering to check for cyclists at intersections, truck drivers and motorists can make a big difference in preventing an accident or fatality. As you wait for a red light, try to look several times for cyclists: front, right, left and back. Many drivers neglect to fully check their blindspots, which is where cyclists are likely to be.

Darkness and Storms. The majority of fatal bike crashes in 2018 occurred between 6 p.m. and 9 p.m., according to the National Highway Traffic Safety Administration (NHTSA). Darkness falls earlier during the winter and there are also snow and rain conditions. Be patient if you see a cyclist pedaling in snow conditions.

As a driver, another step you can take is to look for well-lit roads. You can also look for the light. As a driver, if you see a flicker of color ahead, this is likely a cyclist or pedestrian.

See the Cyclist From A Distance. In addition to checking for cyclists at intersections, always look ahead for cyclists. Scan the side of the roads. Cyclists should be traveling on the same side of the road as you in the same direction, but they may not always do so, especially if they are displaced by snow conditions. By taking time to look ahead, you give yourself more time to respond.

Breakstone, White & Gluck has extensive experience representing cyclists who have been injured in bicycle accidents by negligent drivers in Boston, Cambridge and across Massachusetts. Our attorneys are skilled at investigation and negotiation with insurance companies to help our clients obtain the compensation they need for their recovery.