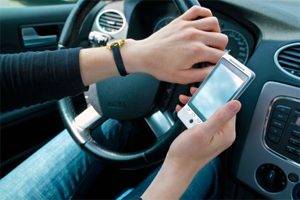 Here is another reason for Massachusetts and other states to consider passing laws which ban handheld cell phone use by drivers. A new study reports one in four drivers who crashed was using a cell phone within the previous minute. Cambridge Mobile Telematics released the study last week to coincide with April’s Distracted Driving Awareness Month.

Our country needs a reminder this year. Motor vehicle accident deaths are on the rise, as the National Safety Council reported nearly 40,000 deaths in traffic crashes last year. In fact, the period from 2014 to 2016 saw the largest two-year increase in more than 50 years.

Meanwhile, this year has already seen hundreds of deaths across the U.S. Just last month came a horrific accident in Texas. A driver in Uvalde County, who was texting while driving his pick-up truck, crashed into a church bus, killing 13 people. Texas is one of 5 states which do not ban texting while driving.

The app uses a smart phone’s sensors to track driver behaviors, such as the way a phone is held. Drivers in stopped vehicles were not counted. The app tracks distracted driving behaviors at speeds greater than 9 miles per hour. Some 29 percent of the distracted drivers were traveling much faster though, over 56 mph.

Massachusetts is one of 45 states which bans the practice of texting while driving. The state’s ban has been in place since September 2010.

Drivers can still make phone calls, except for junior operators who are under age 18 and bus drivers. Though the Massachusetts state Senate did approve a handheld cell phone ban in 2016, the bill never cleared the state House of Representatives.

Allowing drivers to make handheld cell phone calls is a safety hazard and makes it hard for police to enforce the state’s texting while driving ban. Many argue police cannot differentiate between a driver picking up their phone to make a call or reaching for it to check their e-mail or text messages.

But the DriveWell study gives the state of Massachusetts another reason to consider a cell phone ban. Some 14 states already have these bans, including New Hampshire.

Reducing the Distractions in Your Car
Most people think of distracted driving as cell phone use, texting and checking your Facebook accounts. But the distractions run deeper. Distracted driving is really any behavior that takes your attention off the road, including eating, drinking or being engaged in conversations with passengers that take your attention off the road. Think about your own driving routine. How can you reduce the distractions?

About Breakstone, White & Gluck
The Boston car accident lawyers at Breakstone, White & Gluck have over 100 years combined experience representing those who have been injured in car accidents, truck accidents and motorcycle accidents. If you have been injured, learn your rights for seeking compensation. For a free legal consultation, contact our attorneys at 800-379-1244 or 617-723-7676 or use our contact form.