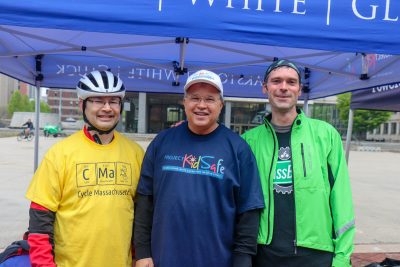 Cyclists have something to look forward to this month. A long-time tradition will continue in Massachusetts: Bay State Bike Month. The schedule began on Sept. 1 and runs through the end of the month.

We encourage everyone who commutes to work to check out the schedule. Breakstone, White & Gluck usually participates in Bike Month activities in the Boston area and we have a lot of fun. We donate bicycle helmets to various events as part of our Project KidSafe campaign. Last year, Attorney David W. White was fitting helmets for commuters at Boston’s Bike to Work Festival at City Hall Plaza.

This is always a worthwhile opportunity to connect with other cyclists and learn about safe riding techniques. But we give cyclists a little more of a nudge this year, after so many of us have been isolated due to COVID-19.

Now in its 26th year, Bay State Bike Month is organized by MassBike, MassCommute and the Massachusetts Coalition of Transportation Management Associations. The goal is to promote cycling for commuting, fitness and recreation, and also introduce the activity to new riders. This year, the event was postponed from May to September due to COVID-19.

The schedule is lighter this year, but small and online events are being added daily. The signature event, MassCommute Bicycle Challenge, will still be held – though virtually – from Sept. 19 to 27. Get ready to log your miles.

While fewer cyclists may physically gather at events, we know many are interested in cycling and concerned about the risk for accidents. That’s why we want to share this video, “Safer Trucking in Changing Cities,” which was recently shared in the Somerville Bicycle Committee’s monthly newsletter. The video was funded by the Joe Lavins Fund for Bicycle Safety.

We encourage anyone interested in cycling on the road to watch this video and hear from local cyclists and safety advocates. They expertly describe safety conditions for cyclists in the Boston area and explain how truck drivers can reduce the risk for bicycle accidents. One topic was infrastructure. If you are new to cycling, it may be valuable to hear the cyclists explain some of the safety infrastructure cities have built in recent years. The cyclists explained how bike lanes, separated bike lanes and bike boxes at the top of intersections can protect cyclists – if truck drivers take the time to learn their responsibilities and give cyclists adequate space in these areas.

SAFER TRUCKING in Changing Cities from FOV videos on Vimeo.

Breakstone, White & Gluck is an award-winning Boston law firm which specializes in personal injury law. With more than 100 years combined experience, our firm has represented drivers, passengers, cyclists and pedestrians injured by negligent driving in Massachusetts.

We have made a special commitment to bicycle safety in Massachusetts. Each year, we donate bicycle helmets to children as part of our Project KidSafe campaign, working in partnership with local police departments, bicycle committees and Massachusetts Safe Routes to School.

We proudly support MassBike as a business member. Our attorneys also work with MassBike to distribute our bicycle helmets as part of our Project KidSafe campaign.