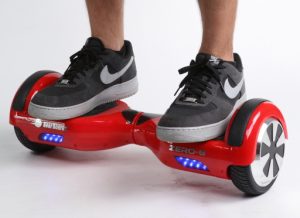 This is the first hoverboard fire to claim a life, though we have heard plenty about the product’s dangers. The hoverboard is a self-balancing electric scooter with no handlebars. You may anticipate injuries such as falls and broken bones. But the greater risk lies with the explosive lithium-ion battery packs, which have caused massive fire damage and now a child’s death.

In December 2015, several major airlines banned hoverboards, dashing the hopes of last-minute holiday shoppers who wanted the cool new toy celebrities were riding all over social media. The airlines said the lithium-ion batteries could cause a fire onboard, and manufacturers were not providing consistent information on the size and power of batteries.

Over the next few months, hoverboards ignited and burned two homes to the ground, including one in Nashville. As her father watched, a teenager was forced to jump from an upstairs window.

Shortly thereafter, Amazon and Best Buy stopped hoverboard sales (at least temporarily). By July 2016, half a million hoverboards were recalled. Amazon was then named as a defendant in a $30 million lawsuit for selling the hoverboard responsible for the Nashville blaze. As the seller of the allegedly defective hoverboard, a retailer may be found liable for selling a defective product under most state product liability laws.

Hoverboard Recall
The July 2016 recall covered hoverboards from 10 manufacturers, all made in China. Consumers were urged to stop using the products immediately and return them. Check online to see if you have a recalled hoverboard.

According to a Consumer Product Safety Commission (CPSC) spokesman, the agency has investigated more than 60 hoverboard fires since Fall 2015. Massachusetts has seen several hoverboard home fires, including in Chelmsford and Somerville, according to The Boston Globe.

For all the dangers, hoverboards are still being sold. In 2016, the CPSC worked with UL, a global product safety testing organization, to develop new standards for hoverboards. Time will tell if the new generation is any safer. For now, hoverboards are a product to keep out of your home and far away from your family. Please share our blog with anyone who has a hoverboard or wants to buy one.

With over 100 years combined experience in product liability cases, the attorneys of Breakstone, White & Gluck have obtained numerous awards for clients injured by defective products. Our attorneys are known throughout New England for our results in these cases and have been consistently recognized as Top 100 New England Super Lawyers and Top 100 Massachusetts Super Lawyers.