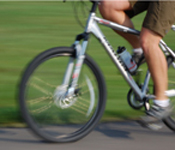 Cambridge and Somerville are known as bike-friendly communities, but new state figures show they are also among the most dangerous places for cyclists in Massachusetts.

Cambridge saw 400 bicycle accidents involving cars from 2002 to 2009, according to The 2009 Top Crash Locations Report, which was recently released by the Massachusetts Department of Transportation. Over the past decade, the city had more bike-and-car crashes than any other community in Massachusetts, a recent Boston Herald review found.

Eight of the top 10 areas for bike crashes were in Cambridge. The state’s most dangerous bicycling intersection was Inman Square in Cambridge and Somerville. From 2002 to 2009, there were 106 bike accidents around Hampshire and Cambridge streets.

Other Cambridge areas included several sections of Massachusetts Avenue, including through Alewife Brook Parkway on the Arlington border. Porter Square – at Massachusetts and Somerville avenues – had the third highest number of bike crashes.

With this growth and changes in Massachusetts bicycling laws in recent years, it is important for both drivers and cyclists to understand the law and follow it. Here the Boston bicycle accident lawyers at Breakstone, White & Gluck share some basic tips:

What Every Massachusetts Bicyclist Needs to Know About Car Insurance

The Boston bicycle accident lawyers at Breakstone, White & Gluck handle collisions involving bicyclists and motor vehicles throughout Boston, Cambridge, Somerville and all Massachusetts. If you have been injured in a bicycle accident, contact us today for a free legal consultation. Call us at 800-379-1244 or use our contact form.