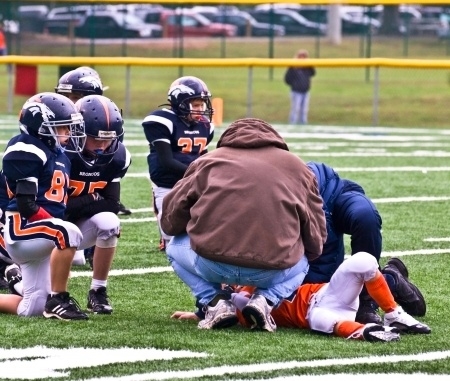 American attitudes about football are changing–even though the sport remains as popular as ever, more adults are re-thinking whether their children should risk head injuries by playing football.

A new study by HBO Real Sports and Marist College Institute for Public Opinion surveyed more than 1,200 adults by phone in July and reports most have learned about the connection between concussions suffered while playing football and long-term brain injury. As a result, one in three adults say they would be less likely to allow their own son to play if given the choice.

Ultimately, 85 percent would let their son play, another 13 percent would not and 2 percent are unsure (The study did not report on how respondents would feel about letting their daughters play).

Seven out of 10 Americans think the benefits of playing outweigh the risk for injury. Also, 74 percent of Americans think football is a good way to build character and boys should be encouraged to play.

One notable point is Americans seem to be placing trust in coaches, parents and even players themselves. Some 30 percent say they are less concerned about the risk of long-term brain injury because these individuals are more informed now and can take greater precautions.

Concussion Prevention for Student Athletes
The majority of states have passed concussion prevention laws for high school athletes. Massachusetts passed a law in 2010, which requires students, parents and coaches to receive annual training on recognizing and treating concussions. Student athletes who are suspected of having suffered a concussion must be removed from play and receive a doctor’s medical clearance before returning. Schools must also report concussions to the state Department of Public Health. The law covers high school and middle school athletes in football, soccer and all other sports.

Today, 49 states have concussion prevention laws. The only exception is Mississippi. Washington was the first state to pass such legislation. In May 2009, the state passed the “Lystedt Law,” named after 13-year-old Zackery Lystedt suffered permanent brain injury in 2006 while playing in a junior high school football game after suffering a concussion.

NFL Settlement
In August, after the survey was conducted, the National Football League (NFL) agreed to settle a class-action lawsuit brought by more than 4,500 players and their families.

The settlement, the result of court-ordered mediation, includes $5 million for men with Alzheimer’s disease, $4 million for those diagnosed after death with a brain condition called chronic traumatic encephalopathy and $3 million for players with dementia. The suit alleged the league concealed what it knew about concussions among its players and failed to protect them from repeated hits in the game. Plaintiffs included Hall of Famer Tony Dorsett, Jim McMahon and the family of former New England Patriots’ start Junior Seau, who committed suicide in 2012.

Youth Football Enrollment Still Increasing
Pop Warner is the nation’s largest youth football league, serving over 250,000 children between the ages of 5 and 15. In recent years, the league has implemented its own safety rules. One rule limits the amount of contact players have to one third of practice time. Another is “when in doubt, sit it out,” when a concussion is suspected.

But enrollment has not decreased as public awareness has grown about concussions and football, officials recently told CNN. Enrollment has increased one percent annually for the past ten years, through 2012.

About Breakstone, White & Gluck
The Boston injury lawyers at Breakstone, White & Gluck have over 100 years combined experience handling catastrophic injury cases, including head injuries and brain injuries resulting from car accidents. We have handled cases in Boston, Cambridge, Quincy, Framingham, Worcester and other Massachusetts communities. If you have been injured, learn your rights. For a free legal consultation, contact us at 800-379-1244 or 617-723-7676 or use our contact form.